Sylvia completed her undergraduate training in Biomedicine at The University of Melbourne before undertaking an MBBS at Deakin University.

After working a year in Shepparton, she completed her Basic Physician Training at Eastern Health. She is now an Advanced Trainee in General and Acute Care Medicine and is hoping to combine this in the future with Cardiology training to provide holistic cardiovascular care.

Outside of work, Sylvia enjoys reading, hiking and looking after her 30+ indoor plants. She is a miserable cook so is looking forward to sampling all of the restaurants she has been recommended in Mildura. Our newest registrar on rotation from Alfred Health is Dr Adrian Chee. The Advanced Physician training position is a six month rotation based at Mildura Cardiology in conjunction with the Mildura Base Hospital.

Adrian completed his Basic Physician Training at Monash and Alfred Health, and is currently an Advanced Trainee in General and Acute Care Medicine, which he hopes to combine with Haematology training. Adrian has previously worked in Mildura several times as a medical registrar, and hopes to return to practice here once he has completed his specialty training. He is also interested in clinical education, and is involved in teaching at both a medical student and junior doctor level.

Outside of work, Adrian has been working on upskilling his culinary skills, as well as having taken up pilates during the COVID lockdown. He highly enjoys the food scene in Mildura and hopes that he can visit Trentham again before he has to leave!” As Mildura continues to grow, so does Mildura Cardiology.

The need for further expansion has made it necessary for Mildura Cardiology to relocate its Cardiac & Specialist Centre to 238 13th street Mildura, previously located in the Mildura Health Private Hospital building.

The new centre is located four doors down from the main clinic at 230 13th street.

This centre provides an outpatient echocardiography service for both adult and paediatric patients. This includes both urgent and non urgent outpatient appointments and a daily inpatient hospital service covering both Mildura Base Hospital and Mildura Health Private Hospital.

Visiting specialists include a Paediatric Cardiologist, a Respiratory & Sleep Physician and a Haematologist. 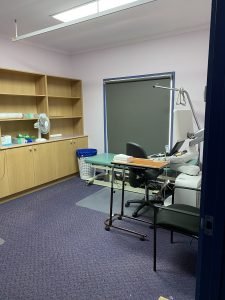 Our newest registrar on rotation from Alfred Health is Dr Dana Forcey. Dana completed both her undergraduate training in Immunology and Pathology, and her MD at The University of Melbourne. Her Basic Physician Training was completed at Alfred Health and the Central Australian Health Service – Alice Springs. She is currently an Advanced Trainee in General and Acute Care Medicine, which she hopes to combine with Nephrology training and she is particularly interested in Indigenous Renal Health.

Outside of work, Dana enjoys hiking and landscape photography. During the coronarvirus lockdown she has inherited a sourdough starter from Carly (assistant practice manager), and is enjoying competing with Carly and Dr Soward in the pursuit of baking the perfect sourdough bread! ‘Dr Juan Mundisugih is our latest Cardiology Registrar from the Alfred Hospital.

He will be working at Mildura Cardiology and Mildura Base Hospital for the next six months.

Cardiology has been his passion since medical school.

He has done numerous cardiology rotations both in Australia and overseas, including rotation in Mayo Clinic, USA.

He is also actively involved in research and has a significant research background with multiple scientific presentations, abstracts, and publications. His long term goal is to practice as a Cardiologist in a variety of settings both urban and rural.’ Dr Raymond Cowling was awarded a Medal of the Order of Australia in the Queen’s Birthday honours.

FOR more than 30 years, Dr Raymond Cowling has been travelling back and forward from Melbourne to Mildura to offer his services to a regional community he has grown to love.

And this week, the 72-year-old senior pacemaker physiologist was awarded a Medal of the Order of Australia as part of the Queen’s Birthday honours.

“I was really pleased, my sister burst into tears when I told her and my partner gave me a huge hug,” he said.

Dr Cowling, the visiting affiliate at Mildura Cardiology, was awarded for his service to community health. While he has worked for many years as a senior pacemaker physiologist and formerly as a senior pacemaker technologist, he has also spent more than 30 years working with people in the recovery phase after an attempt at suicide.

“I thought I would like to help people and I have been able to provide support for those people,” he said.

“I help out as often as they need and it’s good for them.”

The travelling doc has had an extraordinary life.

He first set out to have a career in electronics but it was near the end of his degree that he discovered his passion for medicine.

“To qualify I had to do a year in the industry, so I did it at St Vincent’s Hospital in Melbourne, that was my window into medicine,” he said.

“I was fascinated by research and aspects of the heart.

“I married electronics and medical knowledge together and obtained by first job at Medtronic in Minneapolis in the late 1960s, early 1970s.”

It was there that Dr Cowling witnessed the “evolutionary” change from a pacemaker being an external device to something that was placed inside a patient.

Dr Cowling returned to Australia in 1978 and was employed at Telectronics and St Vincent’s Hospital.

“It was 32 years ago that I joined Dr Alan Soward and Dr Kevin Chambers to start offering pacemaker implantations in Mildura,” Dr Cowling said.

“Eight years ago I retired from all of the Melbourne hospitals but still visit Mildura, averaging 102 visits a year.

“I just love the people and the environment and serving a community in need.”

With frequent flights to Mildura each week, Dr Cowling said the great relationship he had formed with Qantas airline had been an important aspect in being able to do his job.

“I remember when I was on the way to the airport and there was a crash on the freeway but at the time there was an emergency in Mildura, I called the airline and they held the plane for me,” he said.

“During my 32 years coming here, there has been four times that they have waited for me and have saved the lives of people needing help.

“It’s that family, community atmosphere that I like and what has kept me coming back.”

Dr Cowling said while he would like to retire in the near future, his patients don’t need to panic yet as he still has a few years up his sleeve. My name is Alston Ong, and I am a final year (5th year) student enrolled in Monash University Clayton Campus, Bachelor of Medicine, and Bachelor of Surgery (MBBS) program. I am originally from Singapore, and I am currently here in Mildura for my elective rotation in Cardiology.

Anatomy is my favourite discipline in medical school, and so I think I would enjoy being in a surgical specialty in the future. However, I chose to come to Mildura Cardiology for my elective because I wanted to get a rural experience and be well grounded in an area of medicine that was useful and applicable to whichever specialty I chose to pursue in the future. This rotation also came highly recommended by seniors and so I am looking forward to learning a lot and be inspired during my short time here.

My hobbies include swimming, basketball, and occasionally playing the competitive ‘first-person-shooter ‘computer games.

My experience thus far in Mildura has been nothing short of amazing. The staff at Mildura Cardiology are extremely hospitable and everyone here is happy to go out of their way to teach or share their knowledge. Even though it has only been a week since I have started my rotation here, I can already feel that I will miss everyone here when I leave and I will definitely look forward to my next trip back here to Mildura.